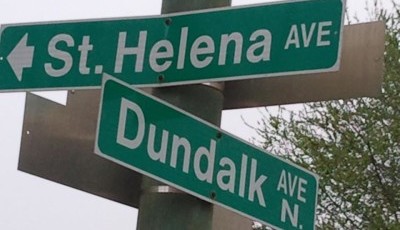 We are located on the corner of St. Helena Ave. and Dundalk Ave. in historic Dundalk. You can click on the street sign image for our physical address and directions from Google Maps.

WHAT ARE YOU LOOKING FOR?

No matter who you are, there’s something I know you and I have in common: we both want joy. We both want the keen, bracing sensation of complete and utter delight in where we are and what’s happening to us.

Everybody wants that – the sailor on the rail passing under the Key Bridge on his way to who-knows-where, the boater letting his craft down the ramp for another lazy afternoon out on the Bay, the respectable woman reading a questionable novel and wondering why it’s so unsatisfying, the retired steelworker wondering about the failure of what used to be the largest steel mill in the world, even the derelict with his face under yesterday’s Sun on a bench at Veterans’ Park. All of them. All of us. People hunger and thirst for real joy, genuine pleasure, and true delight. What folks can’t seem to figure out, though, is where real joy may be found.

At Dundalk’s First Baptist Church, we answer the question very simply: true joy is found in living for God’s glory. And what exactly is “God’s glory”? It’s God’s utter goodness and infinite greatness, put on display for all to see. It’s the visible, sensible proof that God is a big deal – the biggest.

So then, living for God’s glory is living life to make God look good, and to bask in how good God looks.

We simply say that God’s glory is our passion. We have a passion to know more about him, and to show more about him. We thirst to sense more of God’s beauty and holiness and symmetry and love and justice. And we yearn to see others enjoy God as we enjoy him. In other words, Dundalk’s joy is our mission.

You see, we know from the Bible that the only place you’ll ever find true joy is where we have found it: in living for God’s glory. You can live for your pension or your bass boat or you grandchildren or your bowling league if you want to – but there’s no true joy there. If it’s delight you want, you’ve got to drink from the fountain of delight: God Himself.

We’re on a quest for joy here at the First Baptist Church. Come on, and join us in the hunt!

The First Baptist Church of Dundalk began as a small Baptist Sunday School in the Fall of 1929, just as the the stock market was crashing on Wall Street to usher in America’s Great Depression. Paying no attention to economics, simply following our Heavenly Father’s lead, we constituted ourselves as a Baptist church in October of 1930 — the first Baptist church in Dundalk. Within two years after the founding of our church, one in every four American workers was unemployed.

Then would come World War II, then the Cold War, and another war, this time in Korea. The Civil Rights movement took place, then the Space Race and flower power. There was a war on poverty, a war in Vietnam, and a war on drugs, to boot. American courts made it legal to kill unborn Americans, and American citizens were taken and held hostage in Iran. Americans became the world’s greatest benefactors or the world’s greatest villains (depending on who was talking). Meanwhile, America won the Cold War and became the world’s one undisputed superpower. Then September 11, 2001 ushered in a new war, a war on terror.

In Dundalk, mighty industries flourished and perished, while common people and long-established communities struggled to make do and get along with life. Dundalk has tried to be an all-American town, living the American dream, but more than a few folks around here have found that that dream is at least two-thirds make-believe. Yet we all, to this day, beneath all the disappointments and disillusionment, still believe in America, and still believe in Dundalk.

We don’t know what’s going to happen in Dundalk. If there is a significant revitalization in our town, it might be a marvelous benefit to everybody – or it may hurt as many of us as it helps. We don’t know. We just know we plan to be here either way.

We can’t say for sure what will happen in this congregation, either. We do know that we’ll strive with all our might to be a church that lives for God’s greater glory in Dundalk’s deeper delight in all that he is, spreading from our hearts to our homes to our neighborhoods to the nations. We’ll continue to hold to the Bible as our sole and absolute authority for what we believe and how we live. We’re almost certain to maintain our fellowship with the local, state, and national Southern Baptist groups, of course. Like them, we’ll have to learn and grow, in order to continue to touch a changing world with the unchanging gospel. And we’ll fail from time to time, and repent when we realize that we’ve done so. When we do, we know our Father will be faithful to forgive.

Although all of us have found ourselves faithless from time to time, God has proved himself faithful. He keeps his promises, and he keeps his people. In 2020, he will have kept us for ninety years! And he’s not just kept us around. He’s kept us worshiping him, and growing new worshippers, as well.

There’s a word in the Old Testament that’s hard to translate, but full of sweetness and hope. It’s “chesed”. It’s translated “steadfast love” in the English Standard Version, or “lovingkindness” or “mercy” or “love” in other translations. It refers to God’s covenant love, his pure faithfulness, his unswerving commitment to get glory for himself by keeping and blessing his people.  “Chesed” is exactly the word to say how God has been for FBCD throughout our past, and how we know he will be throughout our future. He loves his children, and will never leave us or fail us.